Oh, you know it’s stuck in your head. If not the Christmas carol, than the image of the beautiful shell that leaves a twinkle in the sand as you walk along the shoreline. Many people assume jingle shells are juvenile oysters because they’re often attached to them. But, jingle shells are their very own species known as Anomia simplex. Here are 10 facts for you to better get to know this treasured beachcomber’s find.

1. Jingle shells have thin, translucent shell halves that look like frosted nail polish.
2. Jingle shells have also been nicknamed “Mermaid’s Toenails”, “Saddle Oyster”, or  Or “gold shell”.
3. Jingle shells appear all year and are found in shallow waters, beaches, oyster beds, and mollusk shells as far north as the coast of Nova Scotia, and all the way down south to Brazil.
4. The jingle shell is a bivalve mollusk, similar to mussels, oysters, and scallops, which all have two separate shells or “valves”. The upper valve is rounded and movable. The lower valve is typically flat and forms to the object which it is attached. It has a hole in the top where tufts of filament, the animal’s byssal threads, grow out to attach it to another surface (i.e., Jingle shells are epifaunal just like bromeliads).
5. The raw meat of the jingle shell is sharply bitter to the taste.
6. The jingle shell can reach up to 1-3 inches.
7. The lower valve of the jingle shell remains white, while the upper valve ranges from shiny lemon yellow, golden, brownish, silvery black, or pale buff. The shiny iridescence of the jingle shell is retained even after death.
8. Jingle shells take in water and filter nutritious plankton and other food through ciliated gills.
9. Jingle shells were given their common name because of the sound they make when strung together. Beachcombers often use jingle shells to make jewelry or wind chimes. Julia Ellen Rogers noted in her 1931 The Shell Book that “Pretty lampshades are made by piercing the valves of jingle shells near the hinge and stringing them, then attaching the strands so as to fit over the outside of a plain glass or porcelain shade, whose brightness is pleasantly mellowed by the network of shells”.
10. Fishermen have been known to disperse jingle shells over oyster beds in a process known as “shelling” to create a habitat for oysters can settle. 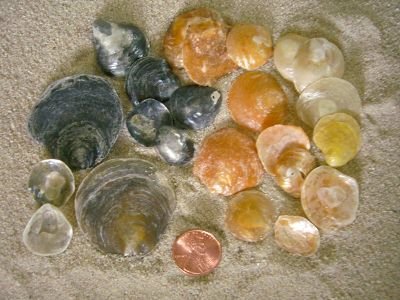 Error: Twitter did not respond. Please wait a few minutes and refresh this page.

What people are saying …

Scroll through the BCS archives …